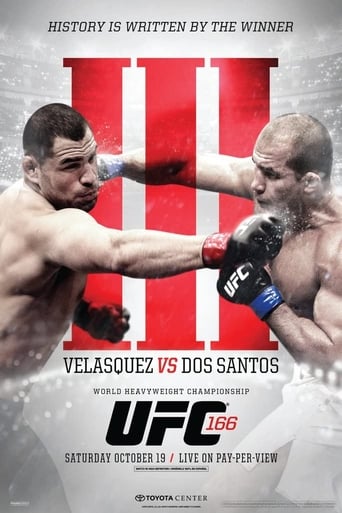 The main event was a UFC Heavyweight Championship bout between the current champion Cain Velasquez and top contender Junior dos Santos. The two have split their two previous encounters with Dos Santos winning the first bout via first round knockout at UFC on Fox: Velasquez vs. dos Santos and then Velasquez winning the rematch via unanimous decision at UFC 155. A bout between George Roop and Francisco Rivera was scheduled for this card, but was moved to UFC Fight Night 31 and replaced by Sarah Kaufman vs. Jessica Eye. Matt Grice was expected to face Jeremy Larsen at the event. However, Grice was forced out of the bout after sustaining serious injuries in a September 8 car accident in his home state of Oklahoma. Grice was replaced by Charles Oliveira who also lost his original opponent, Estevan Payan, due to injury. Subsequently on October 5, Oliveira pulled out of the Larsen bout citing a strained thigh muscle. Larsen instead faced promotional newcomer Andre Fili.