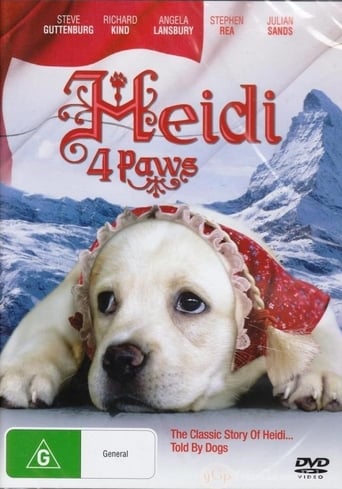 "Heidi 4 Paws" is a live-action re-telling of Johanna Spyri's 1880 children's classic, "HEIDI", but with fully mouth-articulated dogs in all of the roles. "Heidi 4 PAWS" tells the story of the young orphan (this time as seen through the eyes of a yellow lab puppy) who is sent to live with her reclusive Grandfather (in this case an old sheepdog). Just as Heidi adjusts to her new life in the mountains, she is taken away by her social worker (a scrappy beagle). Heidi finds herself living in the big city with Clara Sesehound (a cockapoo mix), who has been made an invalid after a debilitating illness. Although Heidi comes to love Clara, her quest to return to the mountains dominates her stay. In the end, she is able to reunite with her beloved Grandfather. When Clara later comes to visit, the final miracle of Heidi's story is revealed when Clara regains her ability to walk.