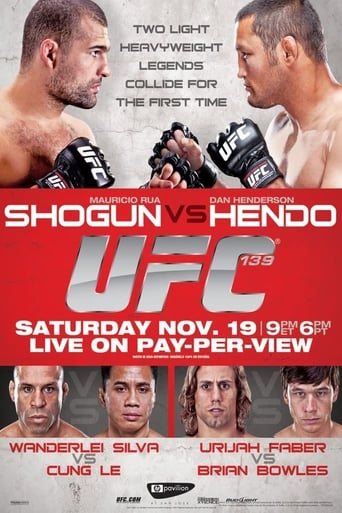 UFC 139: Shogun vs. Henderson was a mixed martial arts event held by the Ultimate Fighting Championship on November 19, 2011 at the HP Pavilion in San Jose, California, USA. The event was the first that the UFC has hosted in San Jose, the longtime home and base arena for Strikeforce. UFC Heavyweight Champion Cain Velasquez was originally expected to have his first title defense against Junior dos Santos at this event. However, on September 2, 2011, the UFC announced that fight would be moved to the inaugural UFC on Fox event. Vitor Belfort was briefly linked to a matchup with Cung Le at this event. However, Belfort was removed from the bout and replaced by Wanderlei Silva. Dana White announced that the winner of the main event between Rua and Henderson will likely be in line for a Light Heavyweight title shot.