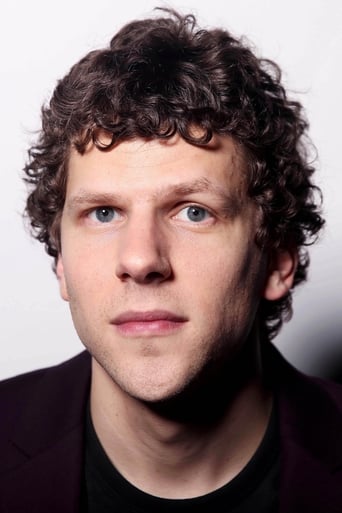 Jesse Adam Eisenberg (born October 5, 1983) is an American actor, director , producer, and writer. He made his television debut with the short-lived comedy-drama series Get Real (1999–2000). Following his first leading role in the comedy-drama film Roger Dodger (2002), he appeared in the drama film The Emperor's Club (2002), the psychological thriller film The Village (2004), the comedy-drama film The Squid and the Whale (2005), and the drama film The Education of Charlie Banks (2007). He is also known for playing Facebook founder Mark Zuckerberg in David Fincher's film The Social Network (2010), which earned him nominations for the BAFTA, Golden Globe, and Academy Award for Best Actor. In 2009, Eisenberg had his breakthrough with starring roles in the comedy-drama film Adventureland and the horror comedy Zombieland. His other films include the Woody Allen films To Rome with Love (2012) and Café Society (2016), and the heist film Now You See Me (2013) and its sequel Now You See Me 2 (2016). He also provided the voice of Blu in the animated films Rio (2011) and Rio 2 (2014). In 2016, he portrayed Lex Luthor in the superhero film Batman v Superman: Dawn of Justice. Eisenberg has contributed pieces to The New Yorker and McSweeney's websites. He has written and starred in three plays for the New York stage: Asuncion, The Revisionist, and The Spoils. His first book, Bream Gives Me Hiccups: and Other Stories, a short story collection, was released in September 2015.