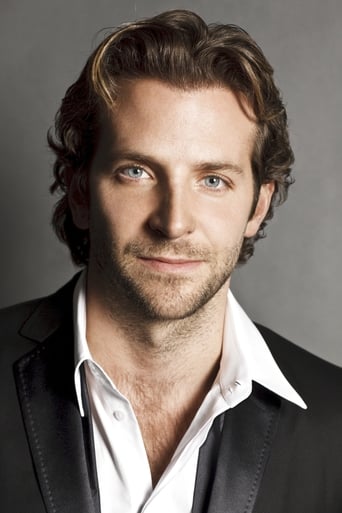 Bradley Charles Cooper (born January 5, 1975) is an American actor and filmmaker. He is the recipient of various accolades, including a British Academy Film Award and two Grammy Awards, in addition to nominations for nine Academy Awards, six Golden Globe Awards, and a Tony Award. Cooper appeared on the Forbes Celebrity 100 three times and on Time's list of the 100 most influential people in the world in 2015. His films have grossed $11 billion worldwide and he has placed four times in annual rankings of the world's highest-paid actors. Cooper enrolled in the MFA program at the Actors Studio in 2000 after beginning his career in 1999 with a guest role in the television series Sex and the City. He made his film debut in the comedy Wet Hot American Summer (2001). He first gained recognition as Will Tippin in the spy-action television show Alias (2001–2006), and achieved minor success with a supporting part in the comedy film Wedding Crashers (2005). His breakthrough role came in 2009 with The Hangover, a critically and commercially successful comedy, which spawned two sequels in 2011 and 2013. Cooper's portrayal of a struggling writer in the thriller Limitless (2011) and a rookie police officer in the crime drama The Place Beyond the Pines (2012) drew praise from critics. Cooper found greater success with the romantic comedy Silver Linings Playbook (2012), the black comedy American Hustle (2013), and the war biopic American Sniper (2014), which he also produced. For his work in these films, he was nominated for four Academy Awards, becoming the tenth actor to receive an Oscar nomination in three consecutive years. In 2014, he portrayed Joseph Merrick in a Broadway revival of The Elephant Man, garnering a nomination for the Tony Award for Best Actor in a Play, and began voicing Rocket Raccoon in the Marvel Cinematic Universe. In 2018, Cooper produced, wrote, directed and starred in a remake of the musical romance A Star Is Born. He earned three Oscar nominations for the film, as well as a BAFTA Award and two Grammys for his contributions to its U.S. Billboard 200 number one soundtrack and its chart-topping lead single "Shallow". He gained Academy Award nominations for producing Joker (2019) and Nightmare Alley (2021). Labeled a sex symbol by the media, Cooper was named People magazine's "Sexiest Man Alive" in 2011. He supports several charities that help fight cancer. Cooper was briefly married to actress Jennifer Esposito, and has a daughter from his relationship with model Irina Shayk.