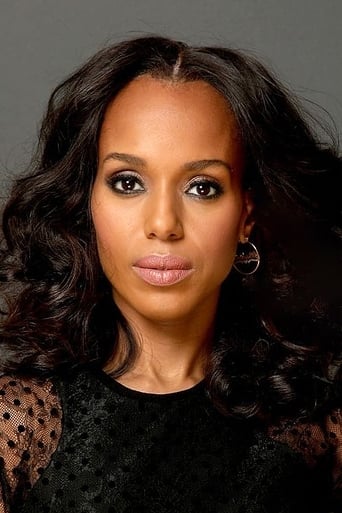 Kerry Marisa Washington (born January 31, 1977) is an American actress, producer, and director. She gained wide public recognition for starring as crisis management expert Olivia Pope in the ABC drama series Scandal (2012–2018). For her role, she was twice nominated for the Primetime Emmy Award for Outstanding Lead Actress in a Drama Series and once for the Golden Globe Award for Best Actress – Television Series Drama. Her portrayal of Anita Hill in the HBO television political thriller film Confirmation (2016), and her role as Mia Warren in the Hulu miniseries Little Fires Everywhere (2020), both earned nominations for the Primetime Emmy Award for Outstanding Lead Actress in a Miniseries or a Movie. In film, Washington is known for her roles as Della Bea Robinson in Ray (2004), as Kay in The Last King of Scotland (2006), as Alicia Masters in the live-action Fantastic Four films of 2005 and 2007, and as Broomhilda von Shaft in Quentin Tarantino's Django Unchained (2012). She has also starred in the independent films Our Song (2000), The Dead Girl (2006), Mother and Child (2009), Night Catches Us (2010), and American Son (2019). Time magazine included Washington in its Time 100 list of most influential people in 2014. In 2018, Forbes named her the eighth highest-paid television actress. Washington has won a Primetime Emmy Award and five NAACP Image Awards, including The President's Award. Description above from the Wikipedia article Kerry Washington, licensed under CC-BY-SA, full list of contributors on Wikipedia.