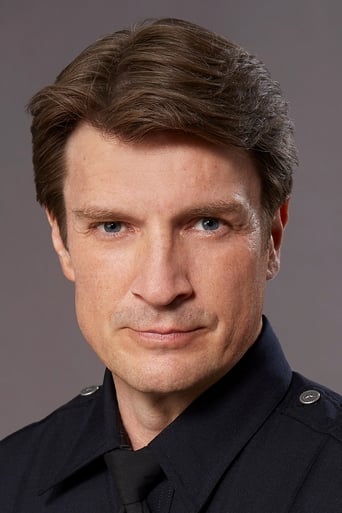 Nathan Fillion (born March 27, 1971, height 6'2") is a Canadian-American actor and voice actor. He is known for his lead role of Captain Malcolm Reynolds in the television series Firefly and its film continuation Serenity, his starring as Richard Castle on the ABC series Castle, and to a lesser extent for his regular role as Johnny Donnelly on the sitcom Two Guys and a Girl. He stars as Officer John Nolan on the CBS police drama The Rookie. He has been involved in TV soap operas like One Life to Live, traditionally distributed films like Slither and Trucker, Internet-distributed films like Dr. Horrible's Sing-Along Blog, voice-over work like the video games Halo 3: ODST and Halo: Reach, and the theatre. He has also been recognized for his looks in People and Entertainment Weekly. His public service work includes the co-founding of Kids Need to Read, an organization dedicated to getting more books into underfunded libraries.